Georgia is an ancient country at the crossroads of the Eastern and Western civilizations, where the European and Asian way of life and traditions merge for thousands of years. Amazing nature and the diversity of this country was the source of inspiration for a lot of writers and poets. Here we have everything that the traveler can only dream about: mountains of eternal snow, mountain lakes, alpine meadows, canyon rivers full of flowers and fruit, palm coasts, natural canyons,

ancient caves, mineral waters and sulfur water pools – thus this place is indeed a heaven on Earth! Georgia is home to the first human outside of Africa who settled down here about 2 million years ago. Georgia has 8000 years of unbroken tradition of winemaking, which is proved by multiple archeological excavations and historical facts. The modern world recognized Georgia as the homeland of wine. It is worth mentioning that Qvevri wine making method was included in UNESCO’s intangible cultural heritage list in 2013. 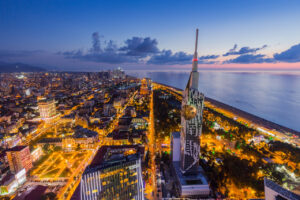 The historical, geographic and political-administrative region of Georgia is Adjara. It is an important tourist destination and includes Georgia’s second-largest city of Batumi as its capital. Adjara is a part of the ancient Kingdom of Colchis, the place where every monument hides history behind it. If you like to read the history in monuments or artefacts, then Adjara should find its spot on your list of the world’s must-see places.

The main city of Adjara – Batumi was declared the best tourist destination by the American Academy of Hospitality Sciences in 2012. In recent Forbes rankings, Batumi was given a place amongst top five ‘velvet season’ recreational resorts. However, this doesn’t mean that Batumi is suitable for only ‘velvet season’ leisure activities. You can visit the city all year round for business or recreation. In old Batumi, next to Piazza, in the alcove of a historical house on Gorgasali Street, you can find the statue of a boy with a flute. This statue is considered to be a symbol of Batumi and has acquired such popularity that it’s modern, modification versions can be found by the entrance of the city boulevard. Check out Ali and Nino sculpture – their extraordinary date expressed in metal awakes wonderful emotions. Batumi is Georgia’s one of the best parts and cultural centres. You can get to the city easily, through terrestrial, aerial and maritime transport be it from European or Asian countries.
This is Batumi – the city which will take its distinguished place in your memories.